This post will go over my experience installing some Mini Split AC's to save power and offer redundancy in heating and cooling.

A few months after I moved into my home, my AC compressor died. It was August at the time which is in the height of summer here in Houston. It was brutal. I ended up getting a whole new AC system 2 days later, but those 2 days were terrible. Because I was in a rush, I also never got time to really research what kind of AC I should get and ended up with something I may not have chosen had I had time to do proper research. Everything was fine, but I was still reliant on a single system. Any problem and I'd have to deal with that again. 2 Years later a contactor failed which was replaced under warranty, but I still had to deal with a day without AC until they got there to replace it, at that point I realized that I should do something so I don't have to deal with that again.

So, I decided to install some Mini Split AC's. It will give me redundancy, better comfort and a lower electrical usage.

I decided to get a dual zone Daikin Mini Split AC. its an 18K BTU outside unit with 2 x 9K BTU indoor units that cool and heat my office and bedroom. Now the AC or furnace can fail completely, and I still have 2 of my main rooms air conditioned and heated if need be.

Here are some pictures of the outdoor unit, and the linesets entering the outside of the room (The white one). Because my office and bedroom have exterior walls, it just goes along and through the wall. More planning is needed if you plan to install one on an inside room, or far away from where you can put the outside unit.

Here are the inside units

Not only does this give me redundancy, but it saves me a TON of power, since my most used rooms are the bedroom and office. It will also run effortlessly even on a portable generator. The most power I've ever seen it draw is 2400w, and that's with both indoor units on max cool, cooling the rooms down to 68 in the middle of summer.

After we got those, we were saving a lot of power by only cooling the spaces we were in, but we still relied on the main AC to then cool down the home in the evening when we move to the living room. We were still saving power, but not as much as we could.

I went one step further and self-installed a mini-split I got a long time ago that was damaged in shipping. This was supposed to be installed in place of the Daikin, but I went back and forth with the company for months. In the end, American Express just refunded me the full amount and I had a free AC. This a 33 SEER Fujitsu unit which is 9000BTU

I had really no idea what I was doing when I started, I just watched YouTube videos, bought the tools and went for it and it went great. Nothing is really all that complicated, the hardest part is probably running the lineset and not kinking it, and figuring out what tools to buy. I feel like I could do the next one with ease!

Since I installed it myself, I decided to skip using a cheap plastic AC pad, but pour a 6 inch concrete pad for the same price.

Here is where the lineset and power enters the attic

And here is the much nicer indoor unit

The indoor unit had to be mounted on an inside wall, which made it a little harder. Luckily on the other side of the wall is a closet. So I built a small cabinet to run the lineset through and into the attic, where it eventually goes outside. I also housed a condensate pump here. I bought the biggest one I could find, and its been working perfectly. I installed a GFCI outlet with Alarm, and also a high water sensor. So if the pump ever fails, I will be alerted. (I still need to make a door for this, one day I'll get around to it)

I finally got the Fujitsu installed on 8/7/22, and my main AC has not been on since, other than to test it now and then. there is just no need. Between these three AC's, they keep the whole 2400sqft house cool, with my 2 spare rooms being slightly warmer than normal. If I turn the recirculation fan on my main AC on, it really balances out the entire house. The Fujitsu AC has been turned on, 24/7 since 8/7/22, it has not turned off.

Now either one of the Mini Splits could fail, and my Main AC could take over. My Main AC could fail and I'd never even notice. The gas could go out, and I could heat my home with the heat pumps, and I could easily power all of the mini splits with even a portable generator. I think this is an excellent investment not only for power savings, but just peice of mind.

One of the huge benefits of these units is that there is no inrush current to start them, which is what usually stops you from running a main AC on generator. These slowly ramp up from zero, making them very generator compatible (And solar battery too!)

Both of these units are 240v, the Dual Zone unit runs on a 20a double pole breaker, and the single zone a 15a double pole breaker. They use minimal power, I'm using almost half the power for cooling compared to what I was before. I used my power monitoring setup to look before and after the install, and on the hottest days I would use around 100kwh, now I'm using around 60kwh with the only thing being changed is the AC's. I also keep it at a MUCH lower setpoint. Before we used to keep the AC set to 76 in the day, and 72 at night, for the reason that if we set it much lower, it would be on 24/7 and use way too much power. Now we set the rooms to 72-74 during the day, and 68 at night. If I added more insulation, I could get my power usage even lower.

Another huge upside to these is that they will ramp the compressor up and down to keep a constant setpoint. If you set it to 72, it should stay 72 the entire time. There is no kicking on and off like with a main AC, so there isn't a point where you get a little too warm, and then a little too cool, its just right all the time.

Downsides and things to think about

There are some downsides to these units though, because they cool so quick, they sometimes don't have a chance to get rid of the humidity as quickly as I'd like. I've found that setting the fan to the lowest speed tends to help with that, but its something to think about.

Another thing is that the plastics can sometimes click and creak when going from fan mode to cooling mode. This is most noticeable on the Daikin models which use much worse plastic than the Fujitsu. Sometimes I will have to go touch it, or just tap it to stop it from making an odd sound. If I were to do it all over again, I would get much higher end indoor units for the Daikin.

Along with the clicking and creaking, you can hear what I would describe as "refrigerant sounds" through the Daikins, this is because the lineset is so short. Its not annoying, but its something to keep in mind. The lineset for the Fujitsu is over 40 feet, so no problem.

I've tested these extensivly on my Generac, and on a portable generator and there is something to note. The fan speed on the inside units is controlled PWM, which means it is referencing the frequency of the power, and its using the 60hz mains power as a reference. This means that if you generator frequency fluctuates, you can hear a very slight difference in the fan speed of the inside unit. I noticed this when running on my Generac and the oven was kicking on and off. Very minor, but something to keep in mind.

Another thing to keep in mind when designing a system, is around the multi-head units. They are NEVER as efficient as the single head units, so keep that in mind. They also have another downside if sized incorectly, and that's that the compressor can't ramp DOWN as much as the smaller units. On my Daikin 18K BTU outside unit, the lowest it can go is 5K BTU before it turns off, and then it has to cycle on and off to maintain a setpoint. But, with a single zone unit and an exterior 9K BTU unit, it would be able to ramp down much lower than 5K BTU. This is especially important when looking at 4 zone units with much larger exterior units. One I looked at would only ramp down to 9K BTU's. That means if you have a 9K indoor head, it can never ramp down, its either full cool or no cool! No good.

The other thing to note with the multi-zone units is that refrigerant must flow through ALL HEADS. That means you can't have one on heat, and one on cool. And sometimes it means you can't have one on fan, and one on cool either. Depending on the temperature, my Daikin will turn off an indoor unit set to fan, when you turn the other to cool. It also means that if you have a far away room you don't use, even if the unit is off in that room, the refrigerant has to go all the way over there no matter what.

Keep these points in mind, and I think you can work around them pretty well and have a good system. I've found that most HVAC companies in my area know nothing about mini splits, so do your research first!

I've been putting off updating PHP on my LibreNMS box for a while, but I finally figured I'd take a crack at it. I was on 7.3 and needed to get to 8.1. I am running Debian 10, and only running LibreNMS on this machine. If you are

If you've read my older posts, you know I have a rack in my unconditioned detached garage with a Cisco switch, an APC UPS, a couple of Raspberry Pi's and some other misc items. Everyone told me it would all fail because it will get too hot in summer, too 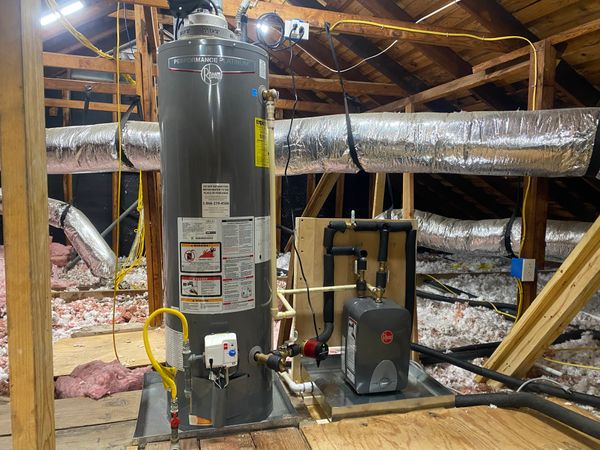 This post details my redundant/backup water heater setup, so I can hopefully never be without hot water, even in the event of a power and natural gas outage. Hot water is not something I ever really thought about. I have a newish (3 years) water heater with a 12