While cleaning up cables in my garage, I swapped the Multimode fiber run to my detached garage from MMF to SMF

Details on my setup can be found here, as you can see, it used to be a mess.

I temporarily just hung it on nails and whatever I could until I could get it permanently cleaned up. I never thought it would take 2 years, but here we are

The old setup was a 0.5m MMF patch cable on each end, and then 2 x 30m fiber cables joined in the middle. This was because 30m was just too short, and I had another 30m on hand. So somewhere behind some shelves in the garage, there was a connector to join the two. The connectors or cables didn't have any protection, and were just hanging around on the floor. Not great.

The new setup is a single 60m SMF run of fiber with no joins, and then again 2 x 0.5m patch cables on each end from the patch panel.

For the optics, I just get Cisco branded. They seem to just work in everything, including my Dell switch.

Why did I go with SMF?

First, I happened to already have the LRM optics. So switching was even cheaper because these transceivers work with both kinds of fiber. Second, I also happened to have the fiber in the right length. Right off the bat that makes it more sense to use it, but Singlemode fiber SHOULD have a longer useful life

Also, you get more cool points.

On to the pictures: This starts in the garage so Ignore the dust!

From the patch panel, it goes into the wall behind my rack, and up through the top plate. I put it inside some orange "smurf tube" split loom

Then up into the ceiling and around

Finally it gets to my breezeway which connects the house to the garage. I have some Sealtite conduit in here already, so I just ran it through there. The orange tubing ends a few inches in

The other one is my AT&T Fiber run, as the termination point is on the back of my garage. I'm doing an identical thing to get it back to my rack

The blue cables are cat5e that goes to cameras and AP's on my garage. They all go back to the switch, which then sends the data over the fiber

Here is the breezeway

From there it goes all the way into my server room, the conduit ends in the wall

Then into a patch panel, and then into my switch 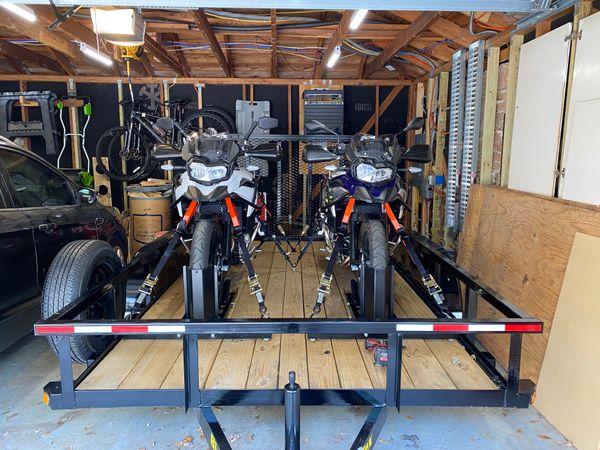 At the start of the year, I decided I wanted to learn to ride a motorcycle. So me and my wife went and took the MSF course and got our motorcycle endorsements. After that, we purchased motorcycles and modified a trailer to haul them around with. Here are all the

A lot of people have asked my why I have no batteries to go with my solar array. Here is the reasonings I did touch on these slightly in my power monitoring post, and my power FAQ, which can be read below Power Monitoring Setup (IoTaWatt + Grafana)After getting solar

After getting solar panels I got used to checking the Enphase app for power details, but it's not very reliable as sometimes the data is delayed, it requires internet access and it can't get me any information other than solar and grid consumption. So if I want to see how